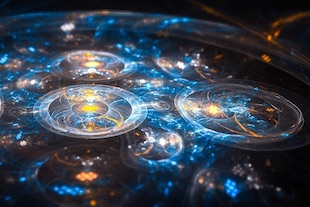 Science News :
We propose a bimonthly summary of recent scientific breakthroughs. It is a great opportunity to better understand and feel how science will inevitably and progressively replace religion(s), and transform the earth into a paradise, thanks to fantastic advances in these four sub-categories:

i- Physical Sciences revealing gradually the composition and vastness of the universe, and suggesting that extraterrestrial and intelligent life is not only possible, but more and more probable.

ii- Life Sciences showing how our human lifespan is increasing to the point of potentially becoming like Methuselah, thanks to the combined benefits of stem cells, gene therapy, and our comprehensive knowledge in genetics, epigenetics and microbiom, which will allow us to finally reach eternal youth—and the synthetic creation of life in a laboratory.

iii- New Technologies constantly revolutionizing our world such as robotics, nanotechnologies, artificial intelligence and 3D printing to name a few, that will progressively lead to the suppression of labor and, in the end, allow Humanity to reach a world of leisure, creativity and blossoming.

iv- Social Sciences advancing in the field of individual or collective happiness, for instance, through meditation.

Atheist creation of life :
Creation of life or scientific design without a god is a third hypothesis (the best one for us) as opposed to the two other existing and antagonistic hypotheses: divine creation of all life “ex nihilo” and spontaneous apparition of life “by chance,” completed by the theory of evolution—a theory is not a scientific law—which we will challenge through facts unexplained or opposing this theory.

Extra-terrestrial Life :
This will be explored through two sub-categories:

i- Discoveries of exoplanets underlying the increasingly high probability of encountering intelligent life in such a vast universe (and the certainty of this intelligent life existing if we consider the Universe infinite).

Science and Religion(s) :
Science will ultimately demystify religion(s) and show that most of them are in fact atheist religions teaching us that we have been created scientifically by “people coming from the sky,” and not by an immaterial god.

Raelian Viewpoints :
Our specialty and uniqueness because Raelism is an atheist Religion in line with the scientific approach and top discoveries, and so much more! Science is our Religion.

Bibliography :
A great opportunity to discover and learn about summaries of scientific books selected for you.

Welcome to a good, informative and happy visit.