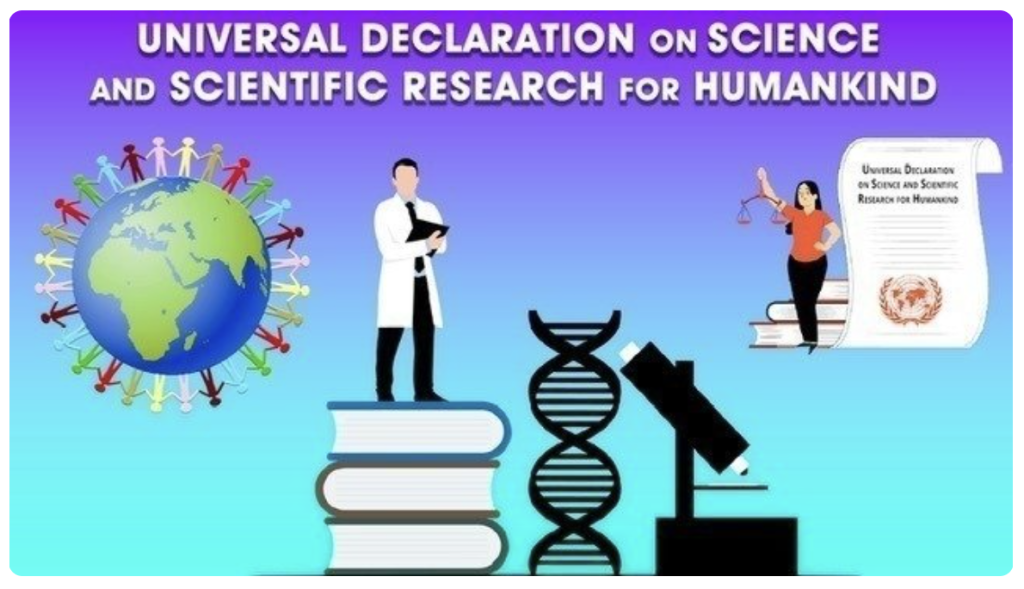 Universal Declaration on Science and Scientific Research for Humankind

This Universal Declaration on Science and Scientific Research for Humankind is addressed to everyone on Earth, and specifically to scientists and government representatives worldwide.

Science is essential for the Future of Humanity.

Science offers the opportunity to solve every problem and to give every human being a happy and comfortable life.

II: Scientific research and discoveries must be used to serve Humankind rather than military activities or private profits.

III: Humanity’s technical and scientific resources must be pooled.

IV: Scientists from all countries must work and truly collaborate for the well-being of the entire community rather than for vested, corporate, or national interests.

V: The first Universal Research Center gathering scientists from every country in the world must be founded.

The priority of research domains shall be chosen by scientists and, for instance, without excluding any area, could be in a first step:

Biology, to expand life span, maintain or improve good health at any age and save Nature.New technologies, such as AI, 3D printing, robotics, and nanotechnologies (nanobots), to suppress tedious and repetitive work. Energy, to offer renewable, clean, and abundant resources for Humanity, especially in developing countries.Social Sciences, to develop well-being for each human being and collaboration between individuals and between peoples.

A Universal School for geniuses and the most promising young people worldwide could also be established close to the Universal Research Center.

We invite everyone, especially scientists and government representatives, to sign this Declaration for a Universal Research Center:

Individuals to express  their agreement and show their personal involvement;Government representatives to support the project and its funding.

We firmly believe that this Universal Declaration on Science and Scientific Research for Humankind will contribute to Peace on Earth and well-being for everybody worldwide, as the Universal Declaration of Human Rights did, and will pave the way to a better world thanks to Science, scientists and human beings of Good Will.

With the support of IRM, International Raelian Movement.