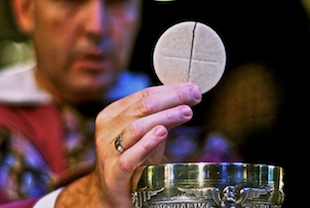 Wheat controls (lanes WC) show amplification products with both pairs of primers, with a more intense band with wheat primers. The human DNA detected in the wheat control was likely introduced during handling of the bread sample. The 5 consecrated bread samples (lanes 1 to 5) analyzed using wheat primers show the 286 bp band that would be expected for regular bread material but that should be absent if wheat DNA had somehow been changed into human DNA through the consecration performed by priests.

Only one sample (number 5) shows a 411 bp PCR product when amplified using human primers, with a much lower band intensity than the 286 bp product obtained with wheat primers. All other consecrated bread samples show no amplification using human primers. Sample 5 is likely a case of human contamination during handling, as inferred by comparison with the wheat control. Taken together, these results are consistent with the consecrated sacramental bread samples being regular bread samples, and inconsistent with the claim of transubstantiation or the idea that the consecration during the Eucharist sacrament would change the wheat DNA into human DNA.

It could be argued whether supernatural claims can or should be tested by science. The famous view advocated by Stephen Jay Gould that science and religion are “non-overlapping magisteria” [3] has been extensively criticized by both scientists such as Richard Dawkins [4] or Yonathan Fishman [5] and philosophers like Russell Blackford [6]. The transubstantiation claim by the Catholic Church is particularly relevant because of the doctrine’s insistence that the transformation of bread into the body of Christ is not symbolic but a physical reality. The claim is both fantastical and easy to test. However, the main reason for this study was to answer requests by former Catholics recovering from dogmatic indoctrination in the hope that it would help others develop informed opinions on the validity of religious dogmas.

As believers themselves agree that the appearance, taste and texture of sacramental bread are retained after consecration, it is unclear what the “substance” that is allegedly transformed could be. If the host still looks like bread and tastes like bread after having been consecrated, the molecules responsible for the taste and texture can not have been affected. This leaves DNA as the most probable candidate. Indeed, if wheat DNA in a piece of bread could be replaced by human DNA, the change would not affect the bread’s texture or taste. On the other hand, it could be argued that DNA represents the actual “substance” of any biological material because it contains the information that defines that material and could be used to create a copy of it. Therefore, testing the transubstantiation claim by DNA analysis seems a quite reasonable approach to take. To critics who would question the assumption that the body of Jesus Christ has human DNA, it can easily be replied that all Christians believe that Jesus had a biological mother (Mary) who was a human being. Uncontroversially, Mary gave her son half of her genome as well as her mitochondrial DNA, no matter who the father was. If Mary or any of her children was tested using the human-specific PCR primers used in this study, the test would be positive, especially because it specifically detects mitochondrial DNA, which is transmitted exclusively by the mother.

This study could be criticized on ethical grounds for using deception to collect samples. Indeed, the individuals who provided us with the consecrated hosts obtained them during communion, pretending to be believers, and transferred them discretely into plastic bags instead of ingesting them. However, these individuals were all former Catholics who had felt victimized by the Church’s dogmatic teachings and saw this action as contributing to their recovery. The moral dilemma of obtaining samples through deception is to be contrasted with the ethics of enrolling non-consenting newborns into a religious organization, endoctrinating children with unquestionable dogmas and instilling fear, guilt and shame in them with long-lasting consequences for their psychological well-being. Anyway, in agreement with our results, we are confident that no sentient being was physically harmed in the course of this study.

This study falsifies the claim that a religious ritual performed by a priest can actually change the substance of a bread wafer into the substance of a human body. It is by no means an attack on religion, but rather a small step in the refutation of superstition and irrational beliefs, an important role of science, at least since the age of Enlightenment. Religions can have important social benefits, and even more so when they evolve with scientific knowledge and update their claims and beliefs accordingly. We hope that this study will encourage others to use the tools of science to test other religious claims, thus contributing to bring enlightenment to their fellow human beings who still live under the influence of dogmatic religious doctrines.